The 2019 Primetime Emmys were anything but predictable — save one inevitable final victory for “Game of Thrones” — and that led to quite a few welcome winners as well as a stack of unexpected losers. In the age of “too much TV,” the TV Academy did an admirable job spreading the love. “Game of Thrones” didn’t even win everything it could. In fact, the HBO drama lost a few awards many expected it to walk away with (Outstanding Supporting Actress, for instance).

That didn’t stop HBO from dominating, even though a stronger-than-expected Amazon made a nice run of its own. Netflix had a night of highs and lows, while broadcast continued to struggle. Take a look at the night’s winners and losers below, but don’t forget to tell us who made an impression on you in the comments.

While everyone talked about HBO vs. Netflix (including announcer Thomas Lennon, who highlighted the battle before breaking for the first commercial), Amazon took the first four awards of the night — Comedy Supporting Actor, Supporting Actress, Writing, and Directing — before going on to win seven trophies Sunday night. That’s two less than HBO, which came in with “Game of Thrones” as a sure thing, and three more than Netflix, which finished second in overall Emmys. Amazon had a helluva night between “Fleabag” and “The Marvelous Mrs. Maisel” — too bad only one of those shows is coming back.

Step aside, Netflix. After tying with the streaming giant for total Emmys last year, HBO took back the throne in 2019, winning 34 trophies to Netflix’s 27. While many expected more — “Game of Thrones” didn’t break the record for wins by a single season of television — this was an important victory as more streaming companies prepare to come for HBO’s crown.

Phoebe Waller-Bridge is an Emmy winner for “Fleabag.” We just had to say that. I know you know, but come on — let’s relish it. Not only did she win for Outstanding Writing in a Comedy Series, but she followed up that victory with two more: Lead Actress (topping Julia Louis-Dreyfus) and Best Comedy Series, beating out fellow Amazon favorite “The Marvelous Mrs. Maisel” and former HBO winner, “Veep.” Plus, lest we forget, she created “Killing Eve,” which took home Best Actress in a Drama Series with Jodie Comer. It’s a helluva night for the white hot talent — there will be more like it coming.

Winning more than half the Emmys you’re nominated for is a solid feat, especially when you were up for 19 total. Securing 10 wins in a very competitive category is quite an endorsement, especially considering how late the show came out and that HBO had to play a little catch-up in the awards race. Though some worry about debuting a series too close to the deadline, “Chernobyl” is a testament to late-race momentum.

“Succession” only pulled five nominations for its first season, but a flood of critical support helped it snag two big wins: Main Title Music for the incredibly deserving Nicholas Britell, and Outstanding Writing for a Drama Series for creator Jesse Armstrong. That’s a great foundation for the series to make a run in 2020 — hey, it’s never too early to think about next year.

“Ozark” won two of the three categories it could win Sunday night, but it wasn’t really expected to win any. The Netflix drama snagged trophies for Outstanding Supporting Actress (Julia Garner) and — in a real surprise — Outstanding Directing in a Drama Series for Jason Bateman. They beat multiple “Game of Thrones” nominees, which perhaps canceled themselves out, but still: “Ozark” is now an Emmy winner. Get ready to hear that for years to come.

So many people bet on the TV Academy sticking with the status quo, mainly because there’s “too much TV” — which means there’s too much TV for anyone to reasonably watch. Julia Louis-Dreyfus would win because she’s won before. Sandra Oh would win because she’s won at other ceremonies. A “Game of Thrones” director would win because it’s “Game of Thrones.” But so many of the winners felt in tune with today’s zeitgeist. Phoebe Waller-Bridge won three times for the critically acclaimed “Fleabag,” Jodie Comer won for a season of “Killing Eve” she owned, start to finish. “Succession” won writing over “Game of Thrones,” as did Jason Bateman’s divisive, very dark directing, which beat out the divisive final episodes of “Game of Thrones.” It’s not that the losers were undeserving; it’s just that the winners felt so current.

“The category is love!” Need we say more about Porter’s historic win? I think not — he said it all. 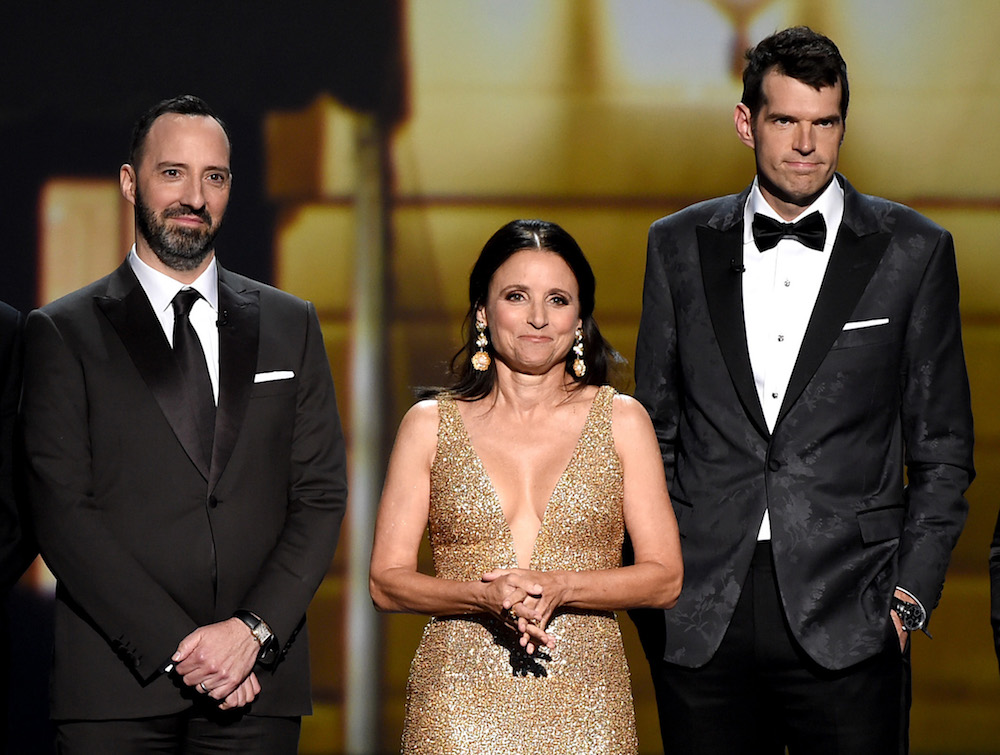 Julia Louis-Dreyfus, Tony Hale and Timothy Simons at the 2019 Emmys

While many expected a victory lap similar to “Game of Thrones” for the HBO comedy’s final season, the Emmys moved on early. Not only did “Veep” lose out for Best Comedy Series, but the unthinkable happened: Julia Louis-Dreyfus lost at the Emmys for the first time in nine years (when she lost to Edie Falco in 2010). The power of Amazon was just too much.

“Veep” got shut out, and “Game of Thrones” won Outstanding Drama Series. I’d turn that around if based only on personal preference, but the fact that “Game of Thrones” didn’t break a record everyone expected it to shatter — the series only needed three wins during the Primetime Emmys to set the single season mark, and it got two — indicates a general shrug for final seasons. It was the theme of the night going in, a dominant talking point during the telecast, and yet it didn’t really carry through in the end. That being said, “Fleabag” is technically a final season… so long as Phoebe Waller-Bridge keeps to her word.

Could Fox have possibly plugged this more? From repeated introductions on the red carpet, to one of the accountants walking out in Masked Singer garb, the Fox reality show was everywhere Sunday night. Sure, that keeps it front of mind, but it’s also exhausting and forced. Is Fox’s post-Super Bowl spot not enough?

Despite being the only television movie nominated for more than two awards, David Milch’s farewell to his Emmy-winning series got shut out in 2019. Its last shot was in TV Movie, a category many expected it to walk away with in an off year for the category, but the latest extended “Black Mirror” episode took home the trophy instead, marking three years in a row a TV Series has won Best TV Movie.

“When They See Us”

After snagging 16 nominations — half of which came in the acting categories — many expected Netflix’s limited series about the exonerated Central Park Five to walk away with a few trophies, if not an outright haul. Ava DuVernay was favored, and it had a decent shot at Limited Series overall — instead, it was kept to two wins overall, with the biggest being Jharrel Jerome’s Lead Actor trophy. That’s a great honor, but not what Netflix was hoping for in the end.

Even Oh would say that Jodie Comer deserves her trophy, but Oh’s loss means an actress of Asian descent has yet to win for Outstanding Lead Actress in a Drama. Odds are Oh will win one eventually — she’s too good to be ignored forever — but the broader exclusion should’ve been handled a while ago.

On the one hand, Netflix had a great night: Jason Bateman and Julia Garner won unexpected trophies for “Ozark,” as did “Black Mirror: Bandersnatch” in the Outstanding TV Movie category. The company also finished with the second most Emmys of any distributor, which is as good as any network could hope for during HBO’s last run with “Game of Thrones.” And yet… after 16 nominations for “When They See Us,” only two wins is disappointing. Worse yet, Netflix still has never won an Emmy in the top three categories — Best Drama, Best Comedy, or Best Series. This was the streamer’s last shot to match Amazon (two wins in Best Comedy Series) and Hulu (one win in Best Drama Series) before Apple TV+ and Disney+ start to move in on their awards territory. Netflix has proven it can play with the big boys at awards shows, but it has yet to officially prove it can close.