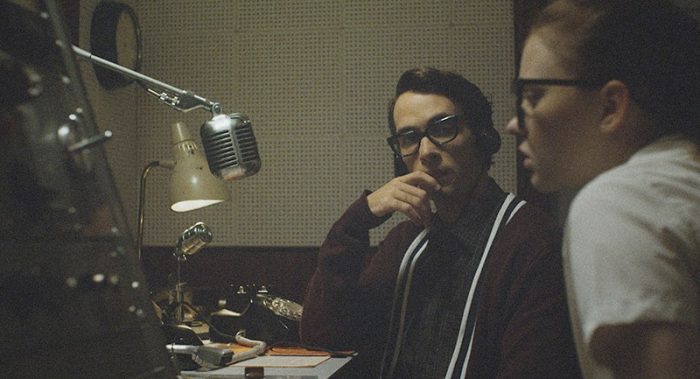 Certain decades have their own tangible fears. The 1950s possessed a culture of fear that has been explored repeatedly throughout the horror and sci-fi genres. Cold war fears were heavily centered around an aversion to the other, technology, nuclear war, and aliens. There’s a singular simplicity in film and television that captures the emotional impact of these anxieties, allowing filmmakers to enhance metaphors through style, dialogue, and setting as opposed to overt displays of violence and nightmarish imagery. Director Andrew Patterson’s feature debut The Vast of Night at Fantastic Fest 2019 applies all of the conventional trepidation of the time period, while delivering a film with concise and unorthodox storytelling along with subtle suspense rooted in sci-fi.

The opening shot invites audiences into a vintage living room while the camera gradually inches towards an antique television playing the introduction to a show called “Paradox Theater.” A clear reference to the beloved classic series, The Twilight Zone, Patterson quickly establishes the tone as the screen engulfs the camera, and the black and white picture slowly fades to a grainy scene at a high school gym in 1950s New Mexico. This is where our journey begins.

Jake Horowitz stars as Everett, a teenage DJ who hosts a radio show in his small town of Cayuga, population 492. With a cigarette dangling from his lips, he wanders around the school’s gymnasium as preparations are underway for the big basketball game. Everett is met with fellow classmate and technology enthusiast, Faye (Sierra McCormick), who works as an operator outside of her academic obligations. Excited about her new tape recorder, Faye is taken under Everett’s wing, as he takes her around the parking lot asking questions as though preparing her for a future role in the radio business. Once they man their respective work stations, the night grows more exciting and terrifying when a mysterious sound comes through one of Faye’s calls on the switchboard.

Alerting Everett of the strange noise, the two play the sound over the airwaves and ask listeners to call in if they know its origin. A caller by the name of Billy (Bruce Davis) informs Everett that he’s familiar with the sound from his time serving in the military. An elderly, sick, African American man, who in his mind has nothing to lose by breaching confidentiality, Billy ignites Faye and Everett’s curiosity as they set out to report on what they’ve learned. Patterson wisely chooses not to reveal Billy’s appearance, instead focusing on his voice drawing listeners into his painful story. There are moments during his dialogue where the screen turns entirely black. This method reflects the era’s reliance on radio for both news and entertainment– the days of sitting around the radio with only a voice guiding the listener’s imagination. It’s a wise technique that exemplifies how the spoken word can be just as intriguing and terrifying as visual images. Davis also delivers a sorrowful, palpable performance as he conveys his exhaustion from the racism he’s experienced. He states those working for that military operation were all people of color and women because no one would listen to them.

The Vast of Night is filled with unconventional storytelling methods on par with these blackout sequences with Billy. As Everett and Faye become increasingly invested in his story, the camera zooms in extremely slow on their faces as they listen. This technique amplifies their fear in a subtle manner while also foreshadowing an invasion from an unknown source. There are a handful of scene transitions that are not entirely fluid, almost serving as a quick commercial break with black and white footage of the characters. It’s an application that further reminds viewers that this is a story within a story of the “Paradox Theater.” As the film focuses on sound, methods like these pay homage to the classic era of television programming. Patterson’s use of the camera is impressive throughout the film. The freshman director possesses an instinctive eye for conveying emotion, danger, and fear with the most subtle and natural ease. Swooping and tracking shots throughout the town allow viewers to place themselves into this small town and feel as though they are experiencing the adventure right alongside Faye and Everett.

McCormick shines as Faye and brings a vivaciousness to her character that is filled with hope, excitement, and intrigue. Despite being set in the 1950s, Faye is not lost in traditional female roles of the era. She is an avid reader of Modern Mechanics and raves about the technological advancements being made with cars and communication. However, as lovable as the characters of Faye and Everett are, they do not possess an arc nor do they evolve along with the storyline. Therefore, it seems like a missed opportunity for further emotional resonance.

Cinematographer Miguel Toan Littin Menz opts out of a crisp picture, instead showcasing a softly granular light that successfully captures rural America and television shows of the 1950s. Enhancing the state of paranoia and fear of the times, writers James Montague and Craig W. Sanger craft a realistic speedy exchange of dialogue in the script as the threat of an alien invasion grows near.

The Vast of Night  encompasses all of the disquieting elements of the Cold War era, while simultaneously harnessing a sweet undercurrent of his characters’ ambition, young love, and hope for the future. Like the characters that are drawn to the peculiar sound and dark sky on that fateful evening, The Vast of Night is a film that lures the audience’s attention to the screen and will leave you wanting more films from Patterson down the road.

The post ‘The Vast of Night’ Delivers a Slow Burn That Is Both Dazzling and Uniquely Distressful [Fantastic Fest 2019] appeared first on /Film.