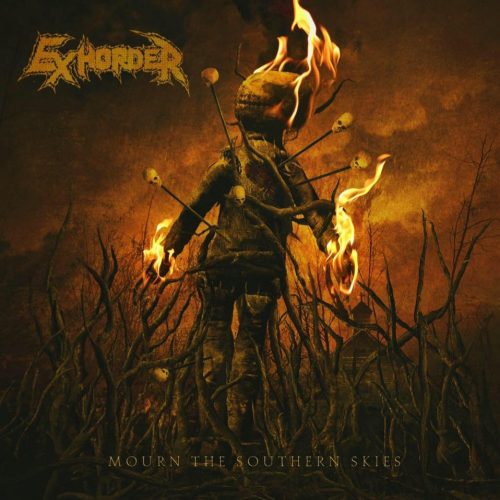 There’re comebacks and there’re are comebacks. The former belong to Atheist‘s Jupiter (released seventeen years after Elements), Decapitated‘s Carnival Is Forever (released eight years and one death after Organic Hallucinosis), and Celtic Frost‘s Monotheist (released sixteen years after Vanity/Nemesis). And comebacks they were—rekindling the fire in fans’ blood and giving a perspective of a band in the here and now. The second kind of comeback is for one-hit-wonder genre godfathers. Though with only a couple releases to their names, these are the ones many consider classics and must-listens. Like this year’s Revelations of Oblivion (released some thirty-three years after Beyond the Gates). While Possessed‘s 2019 comeback is a good album, there’s one better. Exhorder have returned. And they’ve brought their mucky, Southern-tinged thrash with them on Mourn the Southern Skies. And, after a twenty-seven-fucking-year absence, they’re still angry and they still don’t give a fuck.

I mean, would you expect anything less from a band with a debut record called Slaughter in the Vatican? Back in 1990, with the guillotine waiting for the Pope, the back-to-back classics, “Desecrator” and “Exhorder,” and the seven-minute closing track leave listeners devastated. What most metalheads know as the Pantera sound of thrash permeated through Slaughter in the Vatican and even more so on 1992’s The Law. But there’s no Dimebag Darrell, Vinnie Paul, or Phil Anselmo here. Only Vinnie Labella, Chris Nail, and Kyle Thomas. Combining that “Pantera” sound with the aggressiveness and grooviness of Testament, Thomas’ in-your-face vocal approach ravages “Unforgiven” and “The Truth.” But that’s only scratching the surface of The Law—an album that separates the band from the pack. Case in point: the funky bass licks of “Un-Born Again” and the Downiness1 of the cover of Black Sabbath‘s “Into the Void.” Thankfully, Thomas and Labella are still at the wheel on Mourn the Southern Skies. And they’re here to take you on an eye-opening rollercoaster ride as they’ve never done before.

For those diehard fans looking for another Slaughter or Law, opener “My Time” will surprise you. Starting Mourn on a Testament note, this punishing piece presents classic Thomas lyrics in the vein of Annihilator-like verses and clean-and-gruff Anthrax-meets-Susperia-meets-Death Angel choruses. These chorus are a surprising addition to the Thomas repertoire but the passion is neck-deep. Like the opener, “Hallowed Sounds” and “All She Wrote” use the clean-vocal choruses as a climactic point of the song. Killer grooves and enjoyable licks surround these choruses, keeping longtime thrash fans pleased. But is this a 180 from the bone-splintering hate of The Law. Yet, that’s Exhorder in a nutshell: a band with little to lose and a no-fucks attitude.

So says a band that puts the Testament above all others with “Beware the Wolf” and unleashes the stalking Pantera2 on “The Arms of Man.” The former has the bludgeoning brutality and technicality of old-school Exhorder, but with a deep, bullying vocal performance. Especially the modern-day Chuck Billy-esque back-half transition. Following the by-the-numbers “Rumination,” the slow-moving “The Arms of Man” takes mid-paced riffs, snake-like vocals, and the “Texas”-stylings of Pantera through the muck of a hard-hitting Down piece. 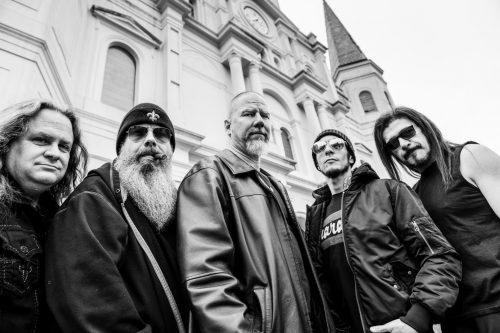 My favorites, though, mix the things I love the most about Exhorder. “Ripping Flesh,” like the lyrically-unpleasant “Anal Lust,” is a short-and-sweet thrasher. While this is what older fans might want from the record, “Yesterday’s Bones” and the closing title track are what to expect. “Yesterday’s Bones” has the nastiest groove this side of the Crossroads. It’s bluesy and groovy as fuck and the vox add their weight to the anvil. But the shocker of them all is “Mourn the Southern Skies.” Beginning with acoustic guitars and true-blue clean vox, this one is like a casket trying to uproot itself from the cold, wet earth of New Orleans. Combining the Down-like qualities of The Law‘s “Into the Void” with those of Pantera‘s “Cemetery Gates,” this one is an eye-opening addition that’ll stop fans dead in their tracks.

After twenty-seven years, the band can still thrash (“Ripping Flesh,” “Hallowed Sounds,” and “Beware the Wolf”) and still surprise (“Yesterday’s Bones” and “Mourn the Southern Skies”). “Asunder” and “Rumination” are the weakest on the album, but they’re better than most of the rethrash out there. Besides, the passion behind “My Time,” “Yesterday’s Bones,” and the title track more than make up for it. The first spin might leave you bewildered but a couple more will make sense. And, ultimately, you have to be into this kind of thrash. From Slaughter to Law to Mourn, the progression is clear. Thomas’ clean vocals may be the biggest surprise to Exhorders, but his heart’s in it and what a voice to have three decades after Slaughter. I’m not sure where Mourn will land on my year-end list, but it’ll sure-as-shit be there.

‘Between Two Ferns: The Movie’ Review: It’s More of the Same, Which Means It’s All Very Funny